March 27, 2021: On the World Day of the Theatre, Oltre le Parole onlus adheres to the initiative of Accento Teatro in Roma called “OFF-AMEN”- Teatri Accesi 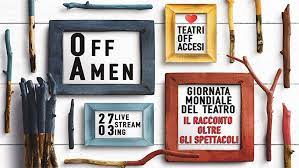 In these months so perilous for the whole theater sector and more generally for the cultural world, we have lost our social references and habits. The closure of the theaters has not only caused economic damage to artists, technicians, companies and related activities, it has produced a worse damage, an unbridgeable gap in the territory. Little is said about the role that Off theaters play in the territory and in the social fabric, and it is almost never included in the mass media ratings. Often called small theaters, cellars, off rooms, over time they have assumed a more ambitious role to become a bridge to the “beauty”, aggregation, knowledge of new arts and artists, especially in those neighborhoods that for characteristics and location have often been forgotten by the various local administrators and / or swallowed up by institutional Theater, those with a capital T. Over time, the Off theaters have built a cultural alternative that would give the whole neighborhood a hope of life, a possibility of creative development and a landing place.

Hence, here are born laboratories, creative workshops, collectives of innovation and experimentation, readings and everything that was not already approved or too small to be of interest to “adult theaters”. Places standing thanks to the passion, dedication and effort of artists, operators, associations that are often forgotten by the various “refunds” or calls.  Because a theater is not only the replica of a show, but also exhibitions, meetings, readings, book presentations, amateur or professional workshops, seminars, experiments …

There are many examples of cultural resistance and transformation all over Italy. This is why that void must be protected today, defended with every effort. So that we don’t forget the very nature that gave birth to them. The Off Theatre is “hungry” to get back on track.

The project at a glance: On March 27th, on the occasion of the World Day of Theatre, a long evening-conference-show will be created in live streaming, with the aim of involving a network of “Off” theaters on the national territory to tell about their initiatives. Artists representing individual theaters will be able to intervene and express their experience of Off Theatre through a monologue, a performance, a story.

And ask for the support, the participation of the public, those “neighbors” who for a year now have found our doors involuntarily closed.